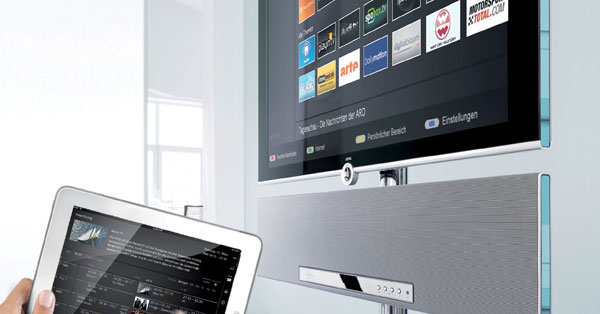 Loewe televisions and integrated AV systems are among the smartest available – and now they’re even smarter thanks to Loewe’s new Assist Media and VideoNet apps for the iPad. With these applications, German premium manufacturer Loewe has significantly enhanced the functionality of its already spectacular home entertainment systems.

The Assist Media app transforms the iPad into an intuitive multimedia remote control with a customisable dashboard and a multitude of useful features, such as One Touch Recording for Loewe’s intelligent televisions. The app provides far greater functionality than a traditional remote, turning the iPad into an interactive touchscreen display and controller in one. A list of channels is placed at the user’s fingertips, with all current programmes clearly displayed, and a highly intuitive electronic programme guide (EPG) provides detailed information of films and TV programmes via the comprehensive Gracenote database. With just a single tap, Loewe TVs can be switched to the desired channel and with Loewe TV’s integrated DR+ hard drive, users can record films or TV programmes via the iPad.

It is also simple to save favourite channels to the customisable dashboard – the homepage of the ‘remote control’ – allowing users to switch swiftly to the channel of their choice. Moreover, Loewe’s MediaNet service – which accesses content from the internet or the user’s home network – is integrated into the Loewe Assist Media app, meaning that even the apps found on MediaNet can be accessed using the iPad. The Loewe Assist Media app is compatible with all internet-enabled Loewe LED televisions over 32 inches, helping the world of Loewe to become even more networked and convenient. The Loewe VideoNet app provides the user with easy access to the best online videos, streaming the latest programmes, online shows, screencasts and podcasts directly to a Loewe flat-screen TV or iPad. It is currently the only app of its kind to conveniently open up not only standard programmes but also other programme types from around the world. It gives the viewer access to all kinds of video content – films and programmes from major broadcasters and user-generated video footage.

Using the favourites function, videos can be conveniently added to the favourites list with just one click. The latest episodes of a podcast are automatically listed, allowing users to access the most up-to-date content, as well as the latest information. Furthermore, the new ‘Send-to-TV’ function enables the user to send their selected videos direct to a Loewe TV. In general, videos – including those on the iPad – are streamed rather than downloaded, which gives several advantages: it is faster, easier and does not use up unnecessary memory.