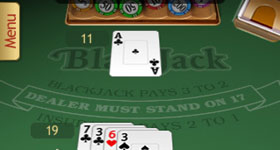 A British company has become the first to launch a real-money blackjack game on the Apple iPhone. Apple’s go-ahead for 32Red’s Blackjack App represents a major step forward for the iPhone and iPad platforms.

In recent months Apple has been tightening its policy on which applications it allows in the app store. But 32Red, an award-winning online casino operator, is ushering in a new era of reliability and credibility in gaming with real money.

“Blackjack is one of the most loved and recognisable card games in Great Britain and is hugely popular with our players online. Our new Blackjack App now allows players to enjoy the thrill of Blackjack on their iPhone while on the move” says Ed Ware, Chief Executive, 32Red.com.

“We have worked hard to become one of the most trustworthy gaming operations on the internet and Apple’s seal of approval is an endorsement of all the hard work we have put in to providing a Second to None gaming experience.”

32Red.com which was established in 2002 operates more than 450 casino games on its site. It floated on the London Stock Exchange (AIM) in 2005.

The game, developed by mobile gaming solutions provider Spin3, also offers previously unseen flexibility to players. Users can take as long as they like to make their next play and log in and out of a live game as they wish.

32Red says it is proud of its record of fast and accurate pay-outs which contributed to its being named Best Casino of the Year six times and Casino of the Decade by the industry watchdog, Casinomeister.

“At 32Red we really value our players from across the world,” says Ware.

“That’s why we operate in 11 languages and five currencies, that’s why we guarantee fast and efficient pay-outs and that’s why all new players on our Blackjack App get a 100% bonus up to £50 free on their first deposit.”