MeerKAT rises from the desert 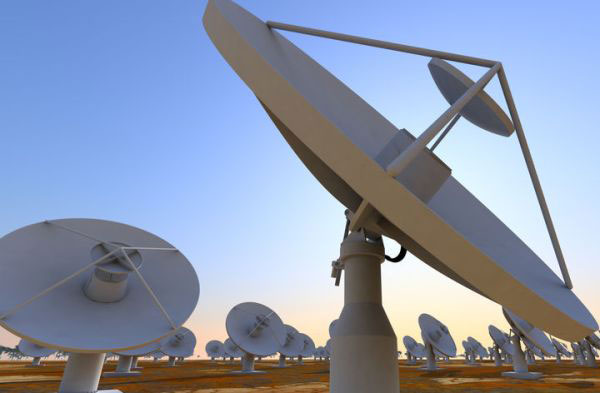 Carnarvon – The first of the 64 antennas of the MeerKAT telescope, the largest and most sensitive radio telescope in the southern hemisphere, and a precursor to the Square Kilometre Array (SKA), has been completed outside Carnarvon, in the Karoo.

Standing 19.5m tall and weighing 42 tons, the new MeerKAT antenna towers above the antennas of the nearby KAT-7 instrument. KAT-7 was completed in 2010 as an engineering prototype for MeerKAT, and is now routinely used for scientific research.

MeerKAT is Afrikaans, meaning “more KAT”, but is also the name of an endearing little mongoose-like mammal that is indigenous to the Northern Cape and other Southern African regions.

The 63 others are still under construction- with the foundation already laid. Almost 5000 cubic metres of concrete and more than 570 tons of steel were used to construct the foundations over the last nine months.

MeerKAT programme manager Glen Collins told SAnews that once all 64 antennas are operational, in 2017, the instrument ray will be so sensitive that it could pick up a cellphone signal from Saturn, making it better than all of the mobile networks in South Africa combined.

Speaking at the launch of the first MeerKAT on Thursday, Collins said that most of the structure is South African built.

Due to the unique 13.5m ‘Offset Gregorian’ design, Collins said, they had to pay careful consideration to selecting South African fabricators that would not only be able to deliver high quality parts and components, but also sustain a production schedule that allowed delivery on installation schedule.

“Because of its so-called ‘Offset Gregorian’, design, each MeerKAT antenna will have two reflectors – a main reflector with a 13.5m projected diameter and a smaller sub-reflector with a diameter of 3.8m. With this design there are no struts in the way to block or scatter incoming electromagnetic signals,” Collins explains.

This, according to Collins means that the instrument will be more sensitive than a more conventional symmetric design, and will deliver excellent imaging quality.

According to Collins, each MeerKAT antenna will generate approximately the amount of data contained on a DVD every second.

The foundations, he said, were constructed to stringent specifications to ensure that the antennas will be exceptionally stable, even at wind gusts of up to 69km/h. He added that scientists must be able to point the dishes at distant celestial objects in an exact manner, and the antennas must be able to survive wind speeds of up to 144km/h.

“The backbone of the antenna positioner is a 25 ton backup structure that consists of about 6000 different components that have perfectly aligned to ensure the structure can accommodate the highly sensitive reflector panels for the MeerKAT.”

The launch of the first MeerKAT antenna coincided with the opening of the specialised MeerKAT Karoo Array Processor Building (KAPB) – observatory site.

The KAPB — the cutting edge data centre for the MeerKAT telescope — has been built in an underground bunker at the Karoo which houses the centralised telescope equipment for the Karoo Array Telescope- (KAT-) 7 and MeerKAT.

General Manager for infrastructure and site specifications, Tracy Cheetham, said the building is constructed 5m underground to protect the on-site radio telescope instruments from radio frequency interference generated by the equipment to the centre and to enhance the thermal efficiency of the building.

Connected by 170km of underground fibre optic cable, the 64 MeerKAT receptors will operate as a single, highly sensitive astronomical instrument, controlled and monitored remotely from the MeerKAT processor on site to the science and engineering office in Pinelands, Cape Town, by using a long-haul fibre- optic link, which is already in place.

“The processed data is then sent to the MeerKAT archive in Cape Town, and on to science collaborators in South Africa and abroad,” Cheetham explains.

Science and Technology Minister Derek Hanekom told SAnews that the launch of the first MeerKAT was a major milestone in the country’s technology and will have a lasting legacy – especially skills development for the young scientists.

“Today signifies South Africa’s commitment to MeerKAT and the broader SKA projects. It also showcases the excellent engineering and technical capabilities that the country has especially in delivering a project of this magnitude within the projected timeframes and budget.”

Minister Hanekom added that the launch of the processor building, and associated design and development activities that had been undertaken marked South Africa’s readiness to embark on a big data programme at national level.

MeerKAT will be incorporated into the SKA – the international enterprise to build the largest radio telescope in the world. Construction will start in 2016/17, with some elements operational by 2020, and full operation under way in 2025.

Africa and Australia were jointly awarded the SKA by the International SKA Organisation in May 2012.

The SKA, which will be a radio telescope, will make pictures from radio waves instead of seeing light waves.

Thousands of antennas, spread over 3 000km, will work together as one virtual instrument, creating a radio telescope 50 times more powerful and 10 000 times faster than any other currently in existence.

The sparse aperture array (low frequency array) and the antenna survey telescope will be constructed in western Australia.

SA has a good story to tell

Government is proud of the scientists and engineers for pioneering a radio telescope that will lead to ground-breaking research. The completion of the first antenna is another important milestone since becoming a democracy twenty years ago.

Due to the experience gained with MeerKAT, South Africa is playing a significant role in the design and development of the technology for the SKA Phase 1. South Africa is currently leading two of the ten SKA design teams.

Hosting the SKA will translate into large foreign investment from building and operating the core and the out-lying stations in Africa.

Local companies stand an excellent chance of being awarded SKA contracts, which will include infrastructure construction and high-tech research and deployment.

The pre-construction preparations of the SKA have already created 354 jobs in surrounding areas, with more to follow in the coming years.

Local communities in the area are already benefitting from infrastructure development, with secondary roads being upgraded and the building of a new landing strip.

The SKA South Africa project has invested in establishing Internet connectivity to the local schools, to boost Maths and Science education for learners.

Through the SKA South Africa’s artisan programme, a large number of the local youth received bursaries to train towards becoming electricians, plumbers, bricklayers and welders, at the Kimberley Further Education and Training College. Eight of these students are now employed by the SKA SA Project. – SAnews.gov.za