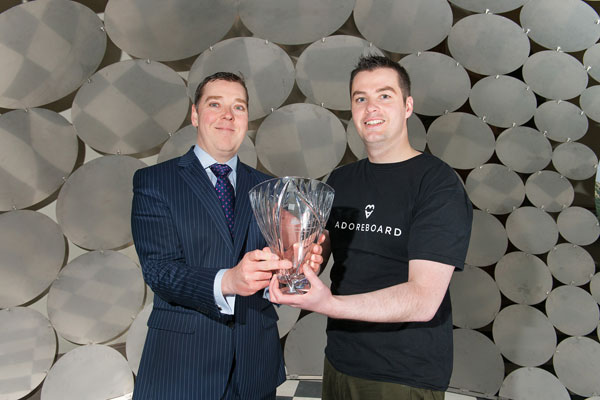 Adoreboard scooped the Irish Technology Leaders Group (ITLG) University Challenge Award for best tech start-up with the most global commercial potential at the recent awards ceremony. The company beat off stiff competition from over 20 third level institutions from across the island of Ireland in a Dragons Den style pitching competition.

The Adoreboard award was made as part of a two day technology forum, where a delegation from Silicon Valley, which included top executives from the global tech sector including CISCO, Intel, DELL, Disney and AOL, met with a shortlist of start-up companies from across the island of Ireland who pitched their innovative technology solutions to an investor panel.

The data analytics software company, which extracts meaning from big data to help brands understand how people feel about them online, faced a panel of seasoned enterpreneurs and corporate leaders including Barry O’Sullivan Senior Vice-President of CISCO.

Adoreboard will now go forward to meet with investors in Silicon Valley at the next ITLG event on the West Coast, USA later this year.  Dr. Paul Donachy who heads the Commercial Development Team in Queen’s University’s Research and Enterprise Directorate, said: “We are thrilled that Queen’s and Adoreboard won in this very competitive catergory, reflecting the predigree of tech start-ups supported by Queen’s. The ITLG award provides a significant opportunity for Adoreboard to now meet with investors in Silicon Valley later this year. For any start-up this is a once in a lifetime opportunity.”

Cian Hughes ITLG Head of Operations commented: “We looked for a company that shows the best global opportunity for a very early stage company in the ITLG University Challenge, and having received entries from over 20 third level institutions all over Ireland, Adoreboard showed us that real potential.”